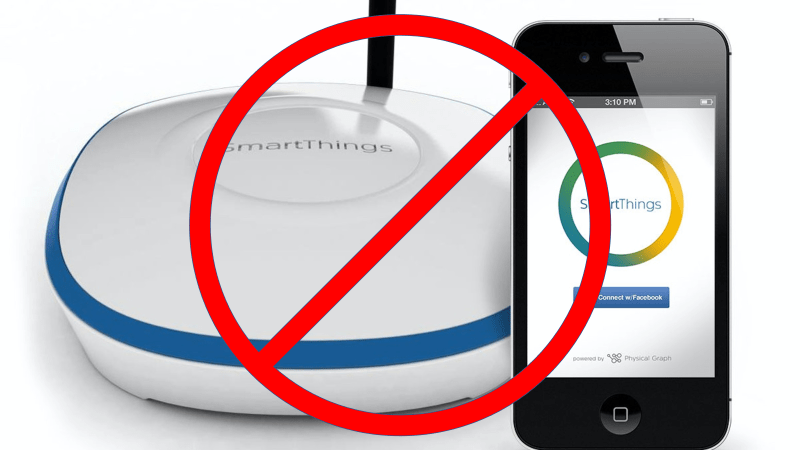 Samsung is causing much angst among its SmartThings customers by shutting down support for its original SmartThings home automation hub as of the end of June. These are network-connected home automation routers providing Zigbee and Z-Wave connectivity to your sensors and actuators. It’s not entirely unreasonable for manufacturers to replace aging hardware with new models. But in this case the original hubs, otherwise fully functional and up to the task, have intentionally been bricked.

Users were offered a chance to upgrade to a newer version of the hub at a discount. But the hardware isn’t being made by Samsung anymore, after they redirected their SmartThings group to focus entirely on software. With this new dedication to software, you’d be forgiven for thinking the team implemented a seamless transition plan for its loyal user base — customers who supported and built up a thriving community since the young Colorado-based SmartThings company bootstrapped itself by a successful Kickstarter campaign in 2012. Instead, Samsung seems to leave many of those users in the lurch.

There is no upgrade path for switching to a new hub, meaning that the user has to manually reconnect each sensor in the house which often involves a cryptic sequence of button presses and flashing lights (the modern equivalent of setting the time on your VCR). Soon after you re-pair all your devices, you will discover that the level of software customization and tools that you’ve relied upon for home automation has, or is about to, disappear. They’ve replaced the original SmartThings app with a new in-house app, which by all accounts significantly dumbs down the features and isn’t being well-received by the community. Another very popular tool called Groovy IDE, which allowed users to add support for third-party devices and complex automation tasks, is about to be discontinued, as well.

Samsung’s announcement from last year laid out the goals of the transition divided into three phases. After the dust settles, it may well be that new tools will be rolled out which restore the functionality and convenience of the discontinued apps. But it seems that their priority at the moment is to focus on “casual” home automation users, those which just a handful of devices. The “power” users, with dozens and dozens of devices, are left wondering whether they’ve been abandoned. A casual scan through various online forums suggests that many of these loyal users are not waiting to be abandoned. Instead, they are abandoning SmartThings and switching to self-hosted solutions such as Home Assistant.

If this story sounds familiar, it is. We’ve covered several similar of IoT service closures in recent years, including:

Considering the typical home is a decades-long investment, we’d hope that the industry will eventually focus on longer-term approaches to home automation. For example, interoperability of devices using existing or new standards might be a good starting point. If you are using an automation system in your home, do you use a bundled solution like SmartThings, or have you gone the self-hosting route?

This news comes [via Ars Technica] and thanks to [MLewis] for bringing this to our attention.